Although pro-Russian fighters and armaments continue to cross the border from Russia into Ukraine, and the intensity of the fighting in eastern Ukraine has increased, the Ukrainian offensive has continued to make progress. Ukrainian forces appear to be on the verge of taking Horlivka, have entered central Luhansk, and are pressing in on Donetsk. Whatever unified political and military leadership there was among the separatists also appears to have collapsed. 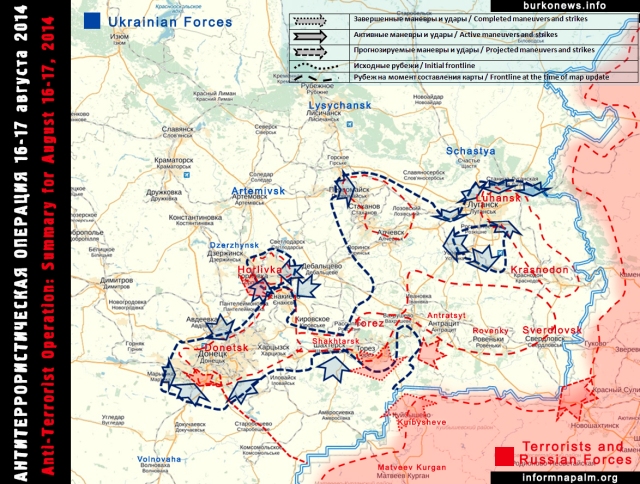 BurkoNews, which offers the most objective assessment of the ebb and flow of the combat in the Donbas that I am aware of, posted the following map of the conflict zone today. As the map suggests, Ukrainian forces have yet to cut Luhansk, Donetsk, or even Horlivka off from supply lines to Russia entirely, but they are close.

There is an excellent summary of Moscow’s options given these “facts on the ground” by Mark Galeotti in Business News Europe (“Russia not invading, nor yet backing down”). Galeotti argues that Moscow’s decision to ramp up the flow of fighters and armaments to the separatists, and the buildup of Russian forces along the border to as many as 40,000 troops, is likely a ploy to pressure Kyiv to negotiate with the separatists rather than a prelude to a full invasion.

Galeotti then reminds the reader that there is a very big difference between Moscow’s current “hybrid war” in the east and a full-blown invasion:

If the Russians ever come genuinely to invade, then it will come as a thunderbolt, with massed airstrikes and artillery bombardments intended to shatter the command structures, supply lines, morale and cohesion of the Ukrainian forces. Moscow would use its overwhelming air superiority to strike deep into Ukraine, not least to prevent quick reinforcement of the frontline forces, cratering runways to prevent aircraft taking off and landing, blasting bridges and ripping railway lines. Meanwhile, its special forces, the infamous Spetsnaz, would spread chaos as they have been trained to do, with sabotage, assassination and misdirection, supported by a massive cyberattack intended to shut down Ukrainian communications.

Galeotti argues that while such a “shock and awe” attack would likely meet with initial success, the Russian military would have a very hard time sustaining its gains in the face of determined Ukrainian resistance, including partisan war. An open invasion would also lead to much more severe economic sanctions by the West, and possibly by a decision by some or many Western governments to provide lethal military equipment and other arms and assistance to Kyiv.

As a result, the Kremlin has probably decided that the costs and risks of an open invasion greatly outweigh the risks. That, however, does not mean that Russia has given up on supporting the separatists. Even less does it mean that the Kremlin will not use other instruments of pressure, including economic instruments, in an effort to keep Ukraine out of the Western institutional orbit in the longer run.

If so, the question is, what next for Moscow? Or, to put it differently, if we assume that (1) the Ukrainians manage to take Horlivka, Luhansk, and Donetsk, and (2) that Russia does not invade, what are Moscow’s options going forward?

Doubtless there are many possibilities, especially the farther one moves out in time, but at the least the Kremlin is going to have to decide on the following.

Many separatists have vowed to continue fighting even if they are driven out of Horlivka, Luhansk, and Donetsk. Presumably that would mean continuing to fight in the countryside, towns, and villages of the southern parts of the region currently controlled by the separatists. If so, the Kremlin could continue to provide them with the same logistical support it has been providing in recent months, including artillery fire near the border. It might also establish a declared or (more likely) undeclared no-fly zone for Ukrainian military aviation along the border.

The immediate purpose of such an effort might be to create a cordon sanitaire along the border (think Israel’s one-time policy in southern Lebanon). It might also be to establish some kind of political entity in a protected zone, as in Transnistria, as well as an effective “line of administrative control” (as in South Ossetia) or a demilitarized zone (as in Transnistria) between the protectorate and Ukrainian forces.

Over the longer term, the Kremlin might reason that continuing to promote instability and violence along the border would make it that much harder for Kyiv to restore the Donbas’s ruined economy, to heal its badly damaged relations with the population of eastern Ukraine, to get the national economy going, to conduct free and fair parliamentary elections later this year, and to ready itself eventually for membership in the EU. The Kremlin’s strategists could also assume that a long-simmering conflict along the border would make NATO membership for Ukraine that much less likely. Finally, the Kremlin might expect that partisan war in the east would enhance its leverage over Kyiv, allowing it eventually to force Ukraine to abandon its EU accession plans, institutionalize military neutrality, rejoin the CSTO, or join the Eurasian Union.

Just how aggressive Russia might be in keeping the pot boiling in the east is also an open question. Rather than trying to establish a more-or-less stable cordon sanitaire, it might support partisan attacks outside the protected zone, including guerilla-style assaults on Ukrainian forces in Ukrainian-controlled territory. The Kremlin could also attempt to subvert Kyiv’s authority in the east by covert means, including special operations and cyber war.

The alternative, presumably, would be to allow Ukrainian forces to establish operational control of the entire conflict zone and secure its border.

Were Moscow to allow Kyiv to defeat the separatists decisively and secure the border, the Kremlin could then adopt a Ukraine policy that employed carrots and not just sticks. It could assume that it will take many years for Ukraine to get its political and especially economic house in order, and years before it is accepted into the EU. And it could assume that reduced pressure, especially military pressure, would make Ukraine less rather than more likely to seek to join NATO or for NATO to offer Ukraine membership. If it were really serious about ameliorating tensions with Kyiv, it could also offer to deliver natural gas to Ukraine at the same price it was charging before the crisis broke out, and it could make clear that it wanted to avoid a full-blown trade war with Kyiv.

The alternative is to pursue an all sticks policy for the foreseeable future. That would mean even more extensive trade barriers with Ukraine; other kinds of tit-for-tat economic sanctions, including restrictions on investments; and a “gas war” over the coming winter. It would also mean an increase in Russia’s permanent military presence along the Ukrainian border and in Belarus, regular military exercises intended to intimidate Kyiv, and regular probing of Ukrainian defenses.

My guess is that the Kremlin is going to opt for an all-sticks policy, despite the fact that I think Russian interests would be much better served by trying to reduce tensions with Ukraine.

As I’ve argued in earlier posts, I believe that Russia’s heavy-handed policies toward Ukraine, and above all its annexation of Crimea and subsequent attempt to establish a “Transnistria on the Donbas,” have made Russia’s security problems with the West much worse, not better.

One way for Moscow to try to reverse this outcome would be to signal to the West, particularly to the Obama and Merkel administrations, that it is willing to enter into direct discussions with Washington, or Washington and Berlin, over a “grand bargain” on European security. My view has long been that Russia, Russia’s neighbors, and the West would be much better served if NATO and Moscow could agree on a European security arrangement entailing some form of military neutrality for Ukraine and Georgia, the preservation of the Intermediate Nuclear Forces (INF) treaty, and the revival of the Conventional Forces in Europe (CFE), with modified limitations on force deployments in the European theater, including in Belarus and the Baltic states, along with extensive confidence building measures. Moscow could make clear, in private and in public, that it wants to address, in a constructive way, the root of the problem, which is Europe’s post-Cold War security architecture, and not a symptom of that problem, which is Ukraine’s external orientation.

The alternative is for the Kremlin to double down on its current course and assume that it is entering into a long-term, zero-sum geopolitical struggle with the West in Eurasia and indeed globally. The objectives here would be to promote the emergence of a multipolar world that was no longer dominated by the West, by Western-designed institutions, or by “Western” values; to ensure that Russia emerges as one of those poles, with its own, more-or-less exclusive sphere of influence in the non-Baltic successor states; to encourage in whatever way possible political divisions within the West; to undermine the US and EU economies; and to hope that the Russian economy will perform reasonably well despite Western sanctions and a continuing decline in the price of oil.

My view is that Russia’s interests would be much better served by the former course. My expectation is that the latter course is much the more likely.